Super Nintendo World was originally planned to open this summer at Universal Studios Japan, but the grand opening has been delayed due to safety concerns during the global health crisis. While we wait for additional opening details from Universal this Fall, some intrepid internet explorers seemed to have stumbled upon samples from a possible website last night.

What has been shared throughout social media in the hours since appears to be a website design showing off the various attractions, dining and shopping, and even interactive features for this new land. See the images and video below, along with additional rumored details, to learn more about what might be awaiting us when Super Nintendo World officially opens! 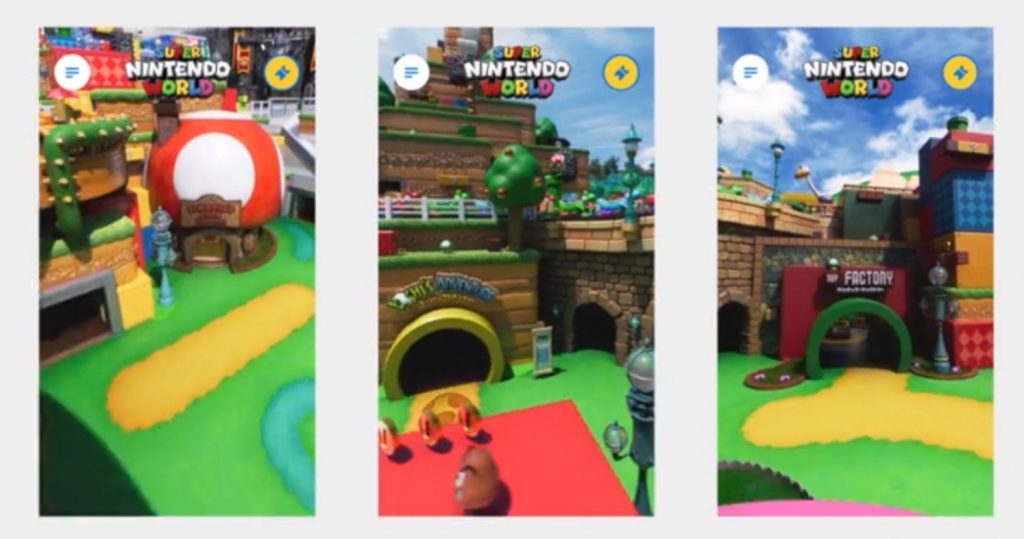 The video was first shared on social media last night, but the original source seems to have been removed. The originals were posted all the way back in March, but went unnoticed until now. A segment from one of the original videos can be seen in the tweet below. This shows a CG rendering of what the inside of the land’s entry warp pipe may look like as we enter the land!

Keeping in mind that none of the following details have been confirmed by Universal, and that they were from March, let’s dive into some of the information contained in the leaked details. Things seem to line up with most of the rumors we have reported on previously, while others confirm things we’ve only speculated on.
//pagead2.googlesyndication.com/pagead/js/adsbygoogle.js 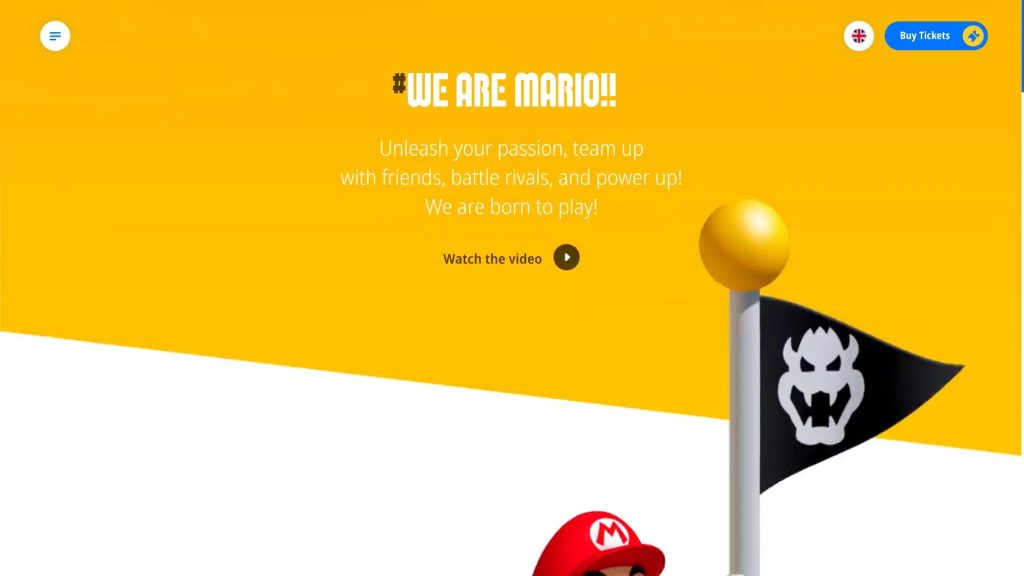 First, let’s go over some overall details. In the image above and the two following, we really start to get the idea that Super Nintendo World is meant to be enjoyed by “all ages.” This is something that Nintendo representatives have attempted to drive home in early interviews before construction even began. 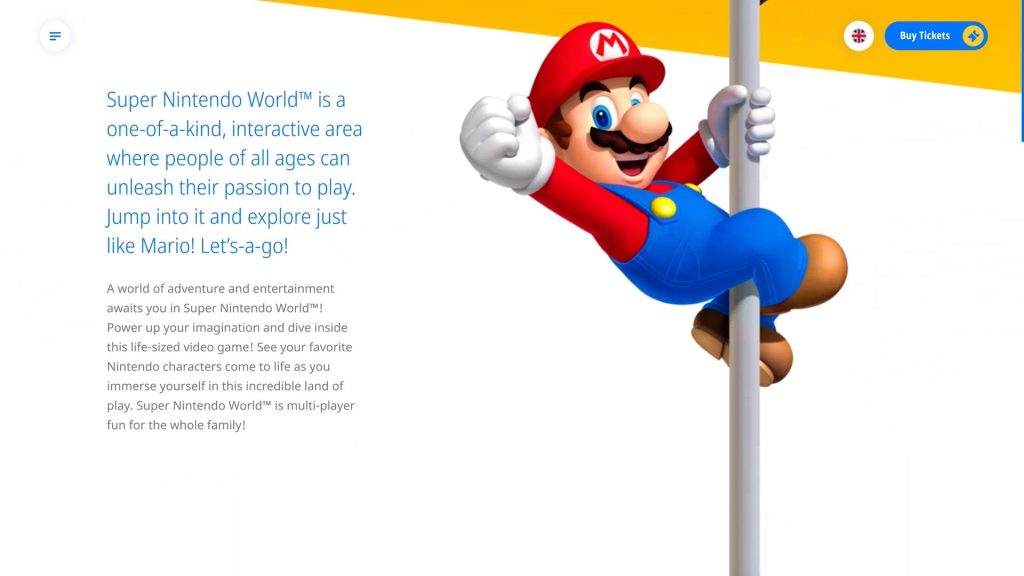 The next image not only shows off a cute map interpretation of the land, but it also explains what we can expect to find at Super Nintendo World: “The fully-immersive journey includes rides, shops, restaurants, and games. Meet you favorite characters and find locations from your favorite games. There’s always something new to discover around the [corner].” 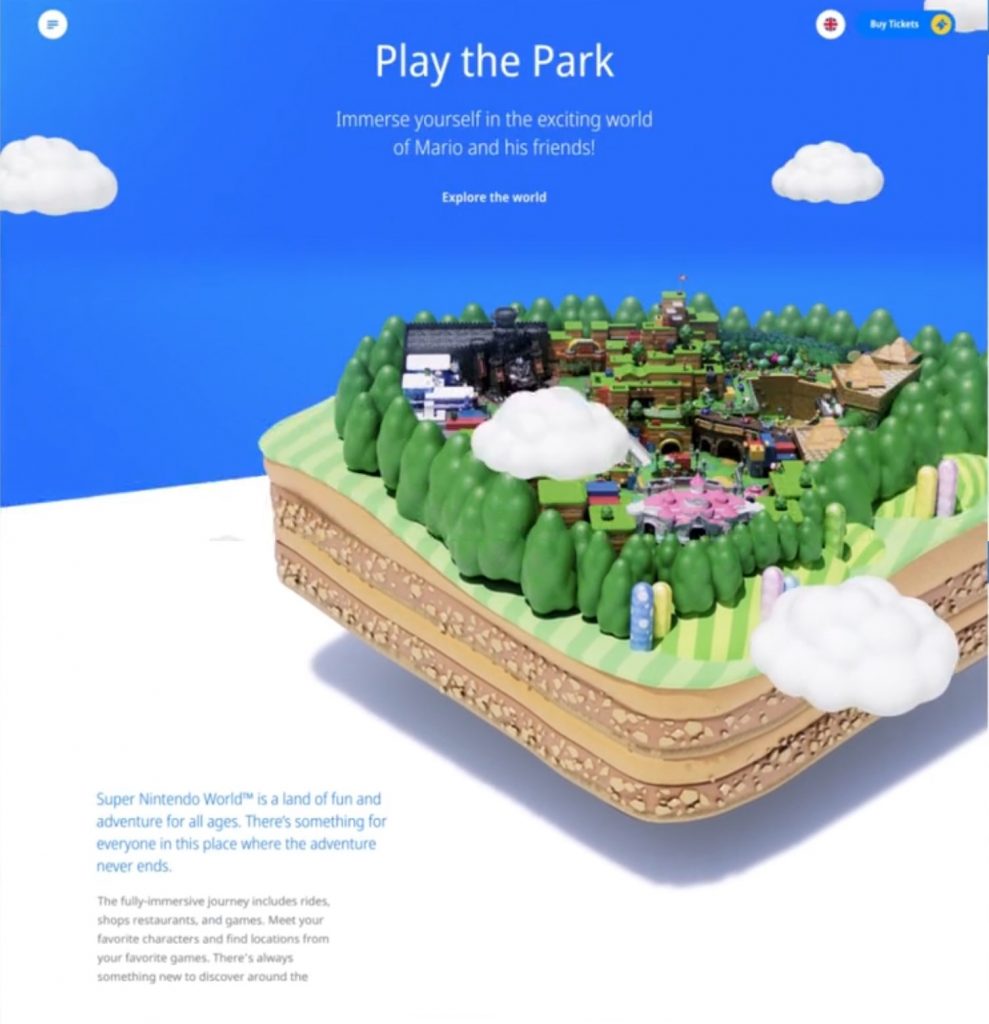 The images also seem to confirm some of the names of various locations within the land. Below we can confirm that the restaurant will indeed be named “Toad’s Cafe,” (Kinopio in Japanese). The Yoshi omnimover ride will in fact be named “Yoshi’s Adventure,” just like we saw in leaked model photos. And the gift shop is named “1UP Factory,” as we saw in recent aerial photos. 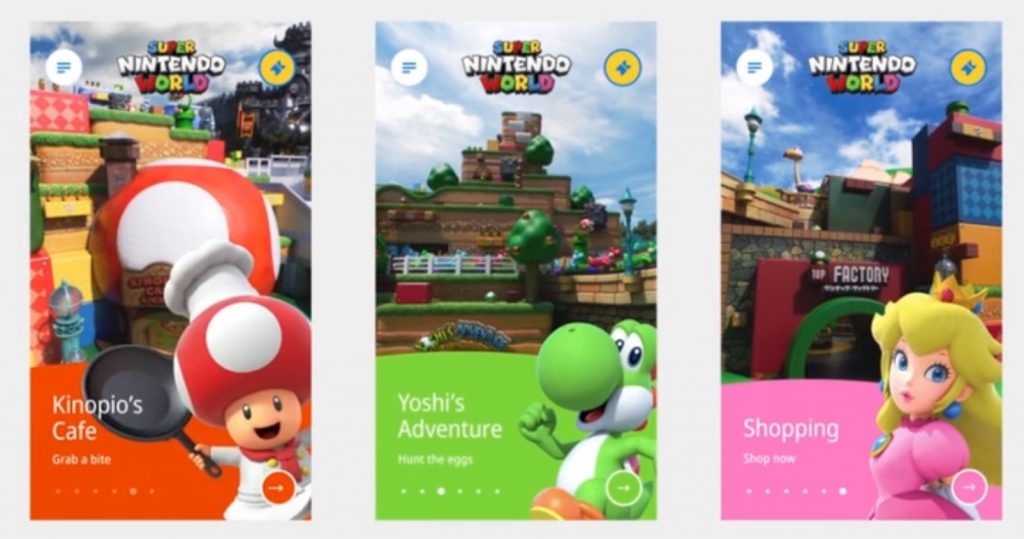 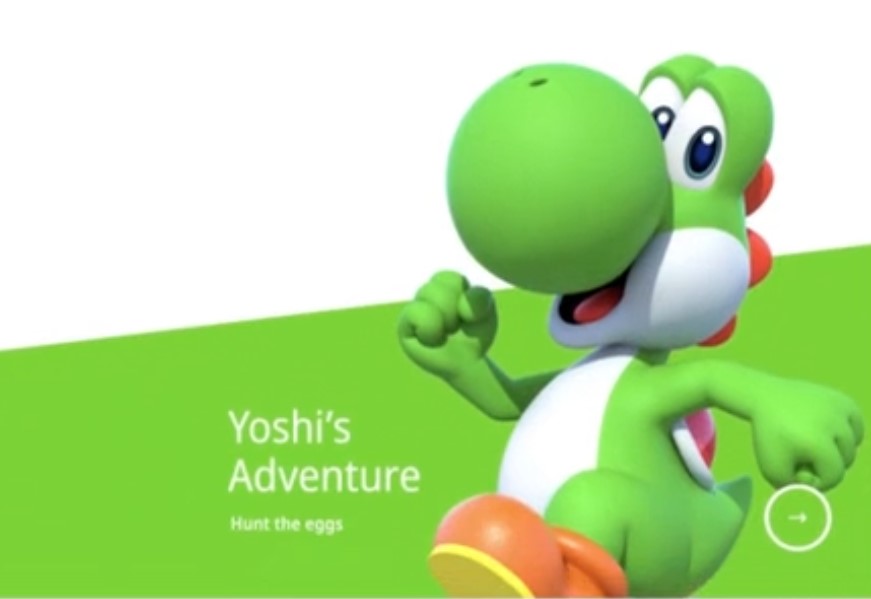 If you’ve been following along with us, you may have seen our breakdown of the Yoshi family ride for the land. With much of it taking place outdoors, these images seem to agree that it’ll offer great views of the land. The description here also describes a bit about the ride, including how it will be a (presumably) interactive adventure to hunt eggs! 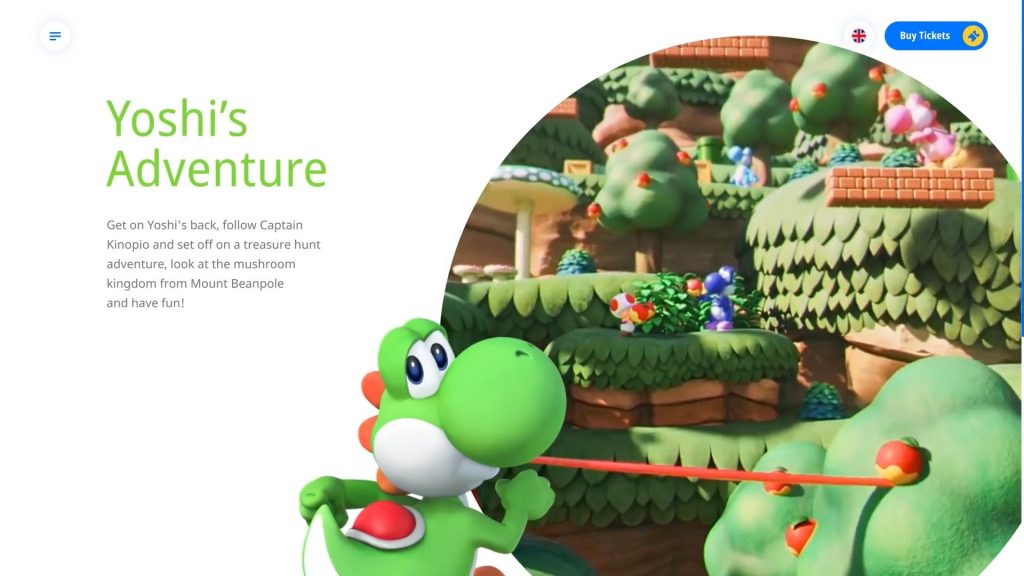 The description lists Mount Beanpole as the location for the ride. That is the Mario flag seen atop the towering section above the Yoshi ride’s entrance. For more details on this attraction see our previous article here. 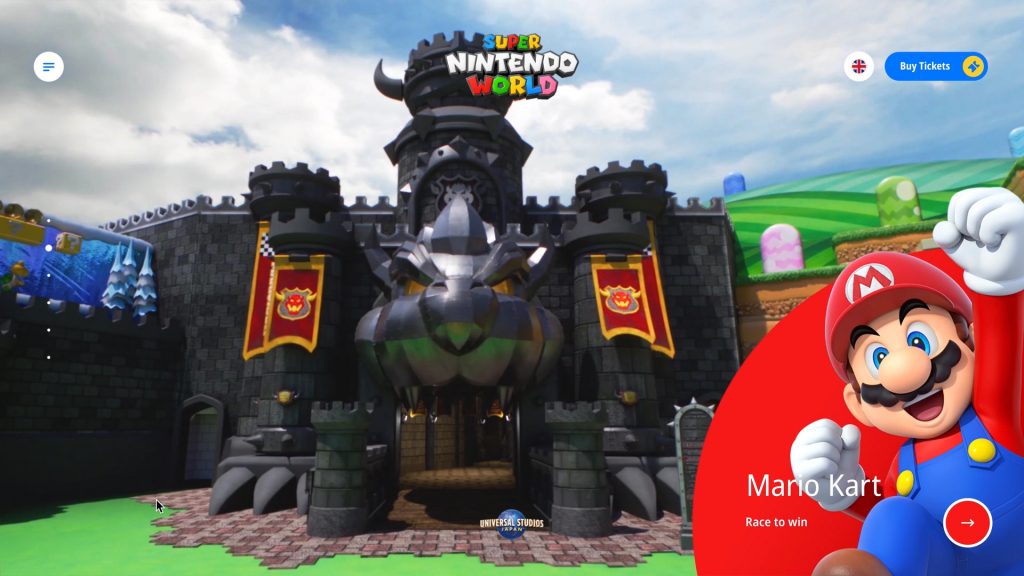 Some of the most exciting imagery we saw from these new photos is for the Mario Kart ride. First off, if this art is to be believed, the actual name for the attraction looks to be “Mario Kart: Koopa’s Challenge.” Although, keep in mind that in Japan, Bowser is called Koopa, (I’m old enough to remember when we called him King Koopa here as well back in the day). So, the actual name may be “Mario Kart: Bowser’s Challenge” when it opens in the United States. This makes sense given that the ride’s facade is Bowser’s castle. 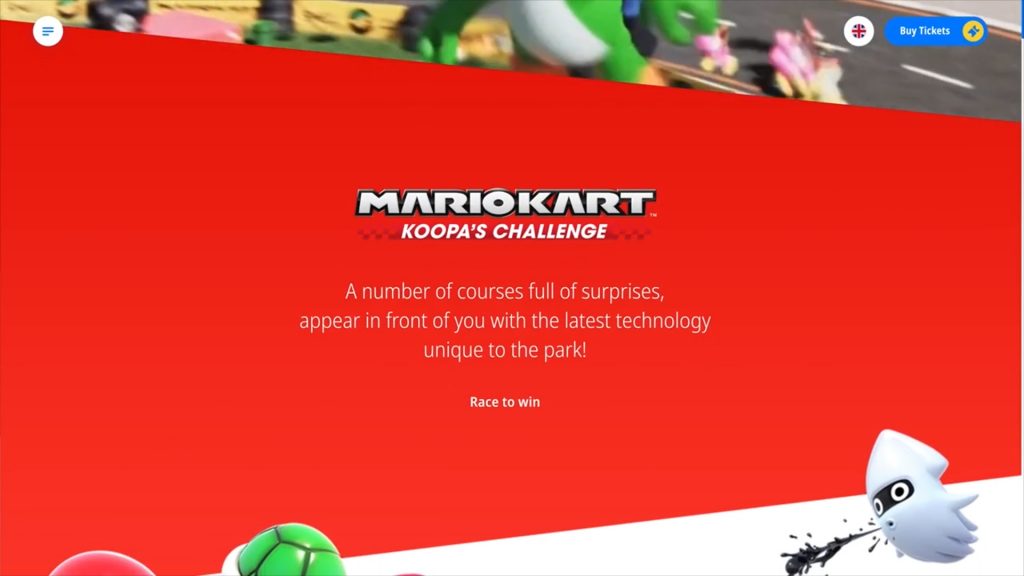 The description in the image above also mentions multiple courses on the ride. We discussed all of the rumored locations for the ride in an article back in December, so this may be somewhat of a confirmation.
//pagead2.googlesyndication.com/pagead/js/adsbygoogle.js

The next image shows some of the possible ride stats, including a ride time of about 5 minutes, a height restriction of at least 42″, and 4 riders per vehicle. These details could change, and may have only been placeholder text, but given the following photos of 4 riders per vehicle I am inclined to believe the others. 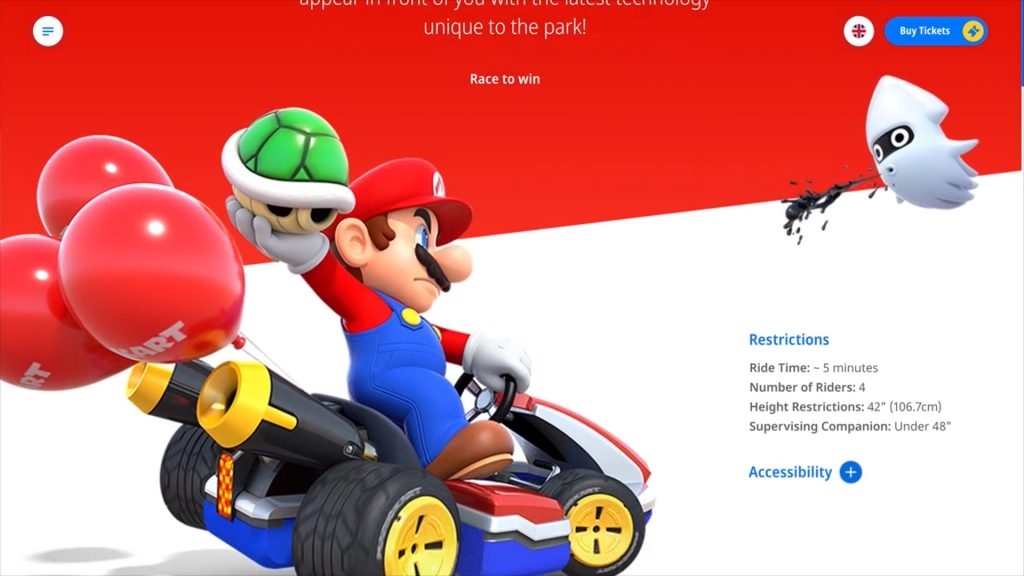 The following promotional photos seem to be have been taken in an actual ride vehicle, but it looks to me that the backgrounds are staged. Universal has been known to take promotional photos in vehicles with a green screen behind them, especially when the ride itself isn’t ready yet. 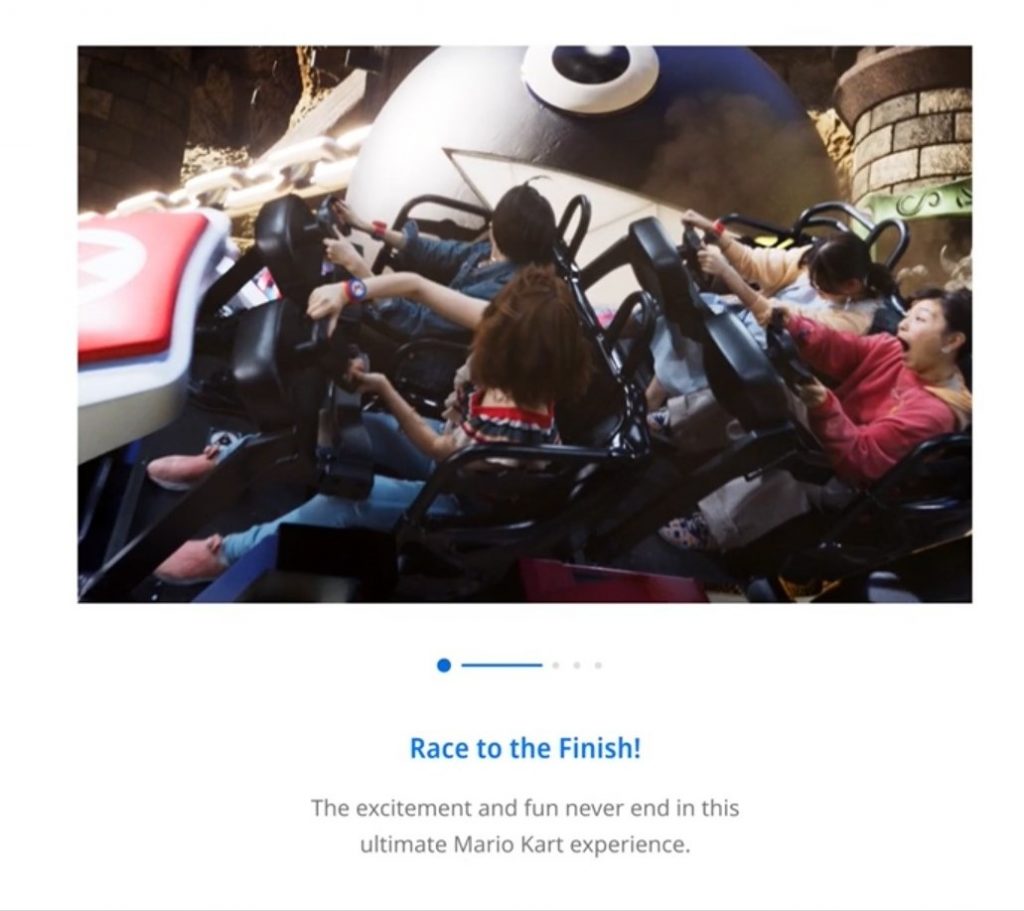 Vehicles seem to have steering columns for all riders, but we’re not sure exactly how that may work. Riders shown physically throwing shells somehow, each with their own color to help tell them apart. Text in one of the images confirms Augmented Reality technology was intended for ride (at least back in March). 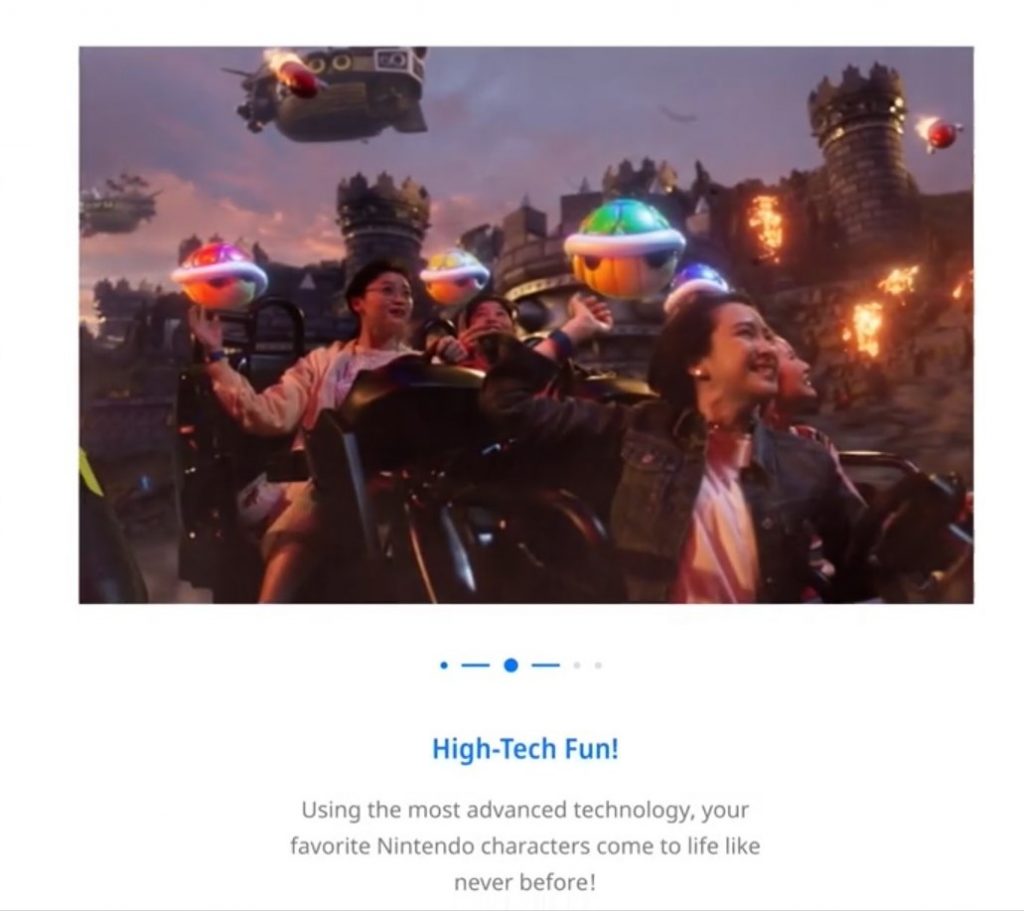 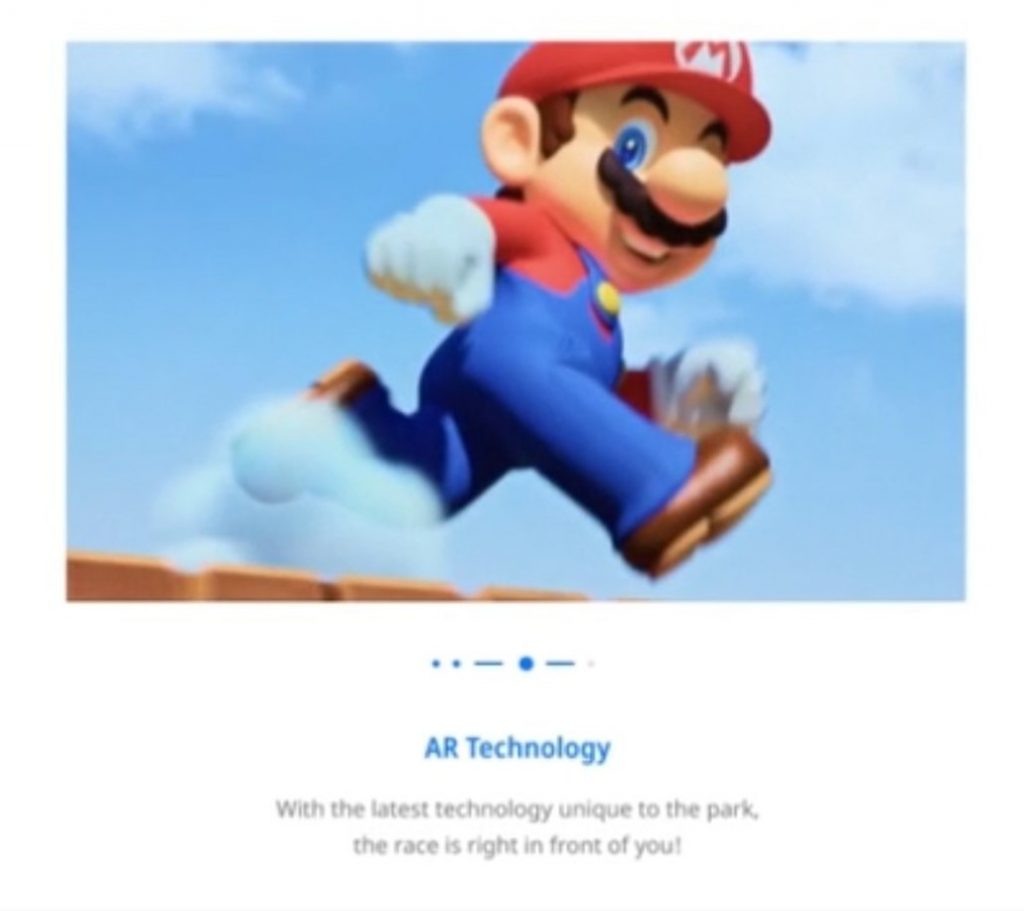 For more details on the Mario Kart ride, including a track layout and rumored scene descriptions, check out our previous article here. 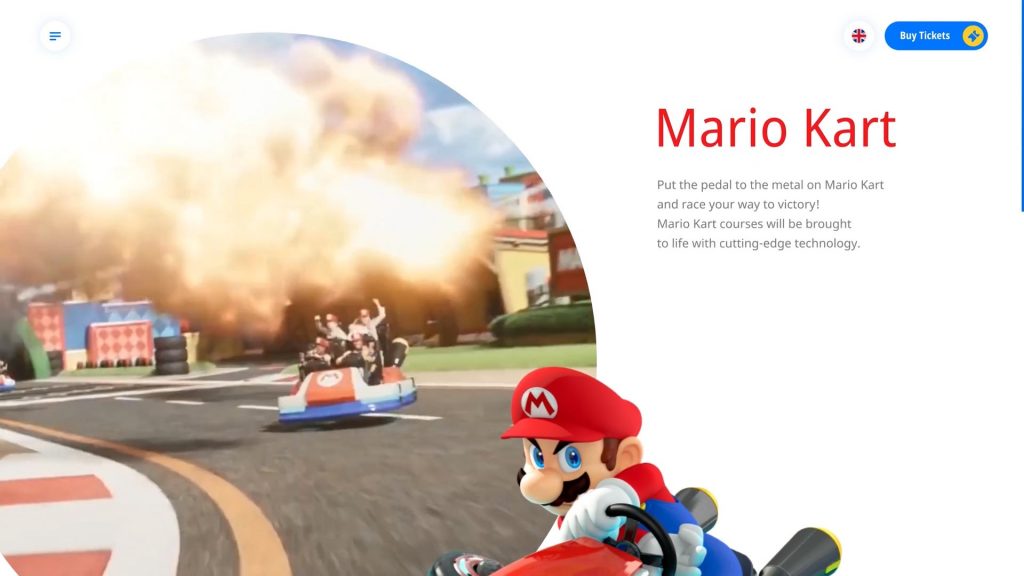 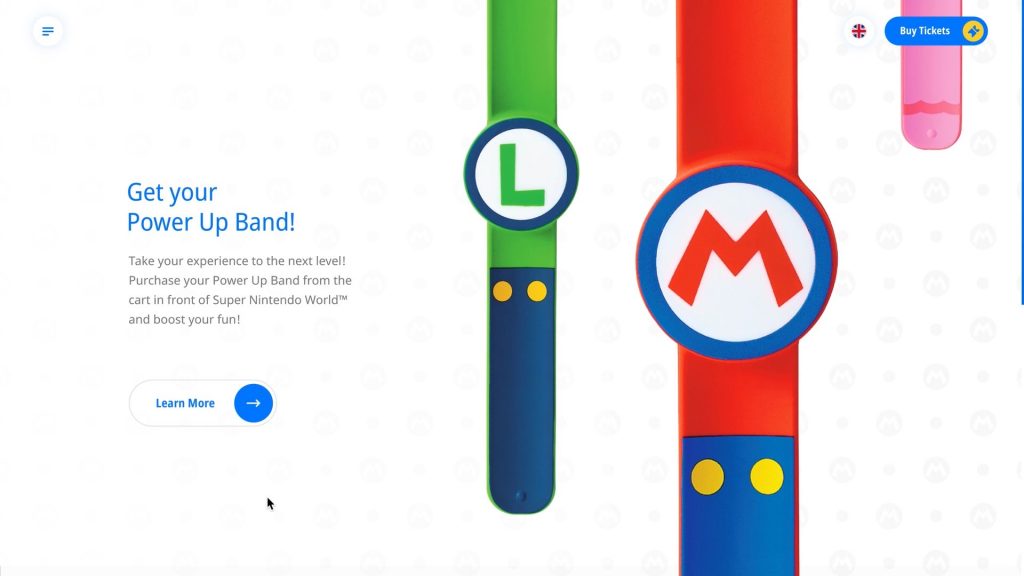 The new images also offer us a good look at the Power-Up Bands and the App, which is how guests will be able to interact with the land and play mini games. Further confirmation that a band can only be purchased is included in the text, but it says you can still experience the area without one. It also says there will be ways to access your game data at points around the land without having to use the app. 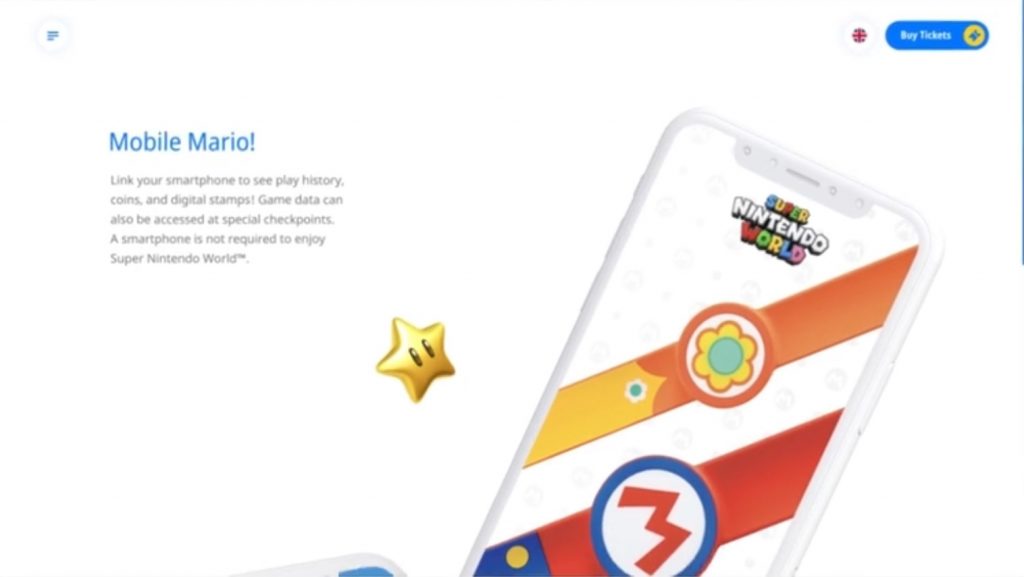 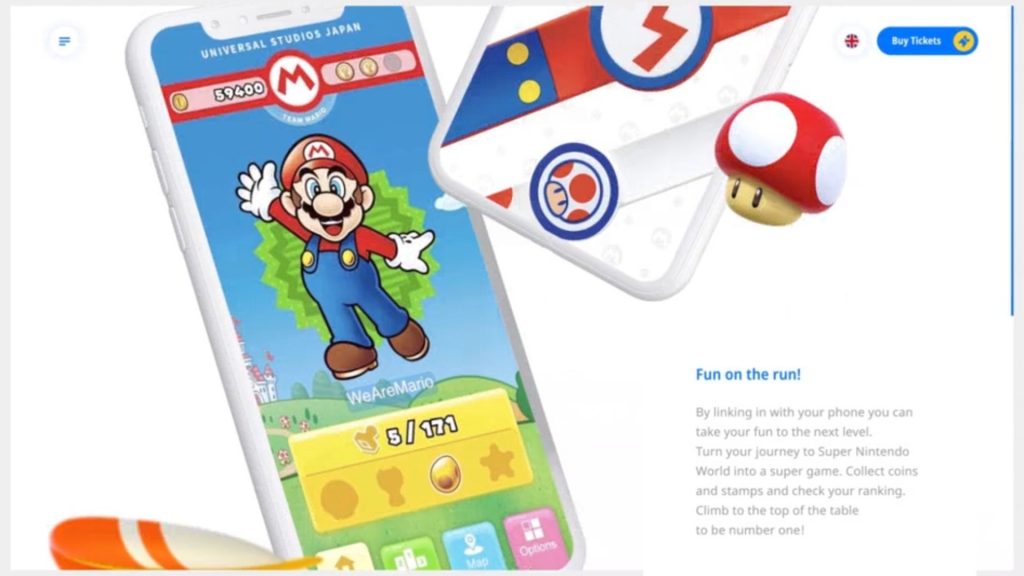 With a big focus of these interactive features incorporating hands-on experiences that may bring guests within close proximity to each other, it’s just not known yet whether they will be available when the land opens up initially. Other safety concerns, including socially distancing within such a tightly-packed land, may be part of the reasoning behind a delay in opening. 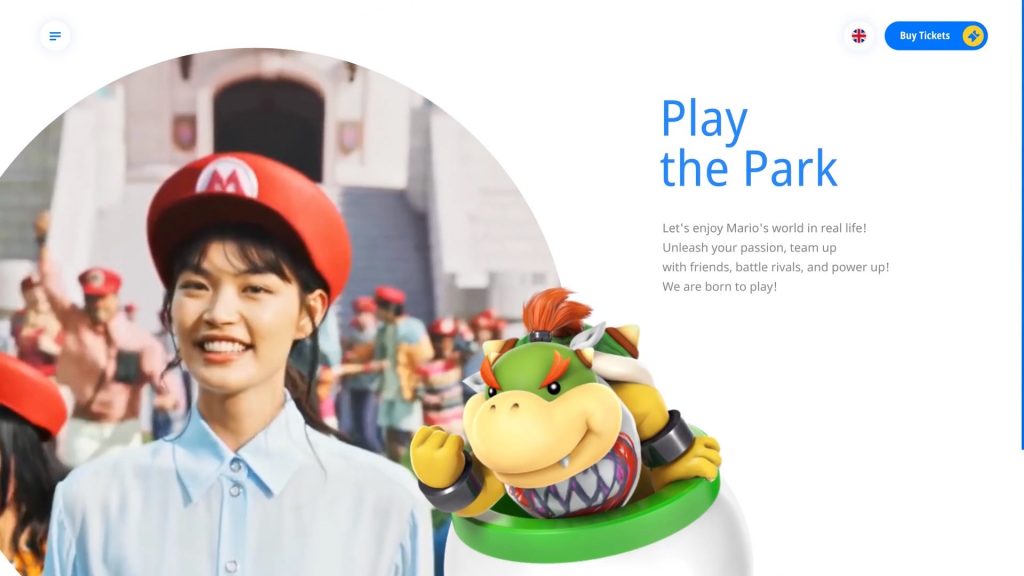 Universal Studios Japan has said that they plan to tell us more about when the land may open this Fall. It sounds like they’re waiting to make this decision until it is safer to reopen with additional capacity. In the meantime, be sure to check out my recent construction update and rumor recap video below, or see the article version here.

I also recently talked about the rumored possibility of Super Nintendo World shifting from Epic Universe to another location at Universal Orlando in a guest article at the Theme Park Shark. It sounds like this may be something Universal could be considering, but hasn’t yet been officially greenlit. Read more about that here.

Remember again, that none of the images featured above have been confirmed to be real from Universal. To never miss an update on Super Nintendo World news, be sure to subscribe to our news feed or enter your email address below.